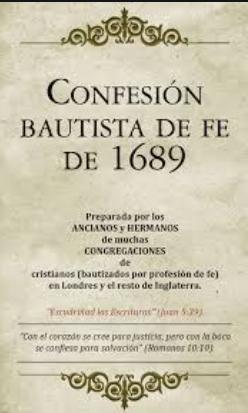 The 1689 Baptist Confession of Faith, also called the Second London Baptist Confession, was written by Particular Baptists, who held to a Calvinistic soteriology in England to give a formal expression of their Christian faith from a Baptist perspective. Wikipedia

The confession was first published in London in 1677 under the title “A confession of Faith put forth by the Elders and Brethren of many Congregations of Christians, Baptized upon Profession of their Faith in London and the Country.[5] With an Appendix concerning Baptism.”[3] It was based on the Westminster Confession of Faith (1646) and the Savoy Declaration (1658), with modifications to reflect Baptist views on church organization and baptism.[3] The confession was published again, under the same title, in 1688 and 1689.[3][6]

The Act of Toleration passed in 1689 enabled religious freedom and plurality to co-exist alongside the established churches in England and Scotland. This official reprieve resulted in representatives from over 100 Particular Baptist churches to meet together in London from 3–12 September to discuss and endorse the 1677 document. Despite the fact that the document was written in 1677, the official preface to the document has ensured that it would be known as the “1689 Baptist Confession of Faith”.[6] Wikipedia